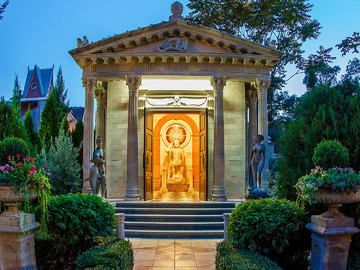 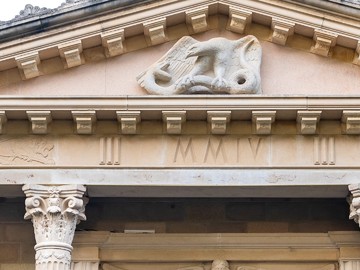 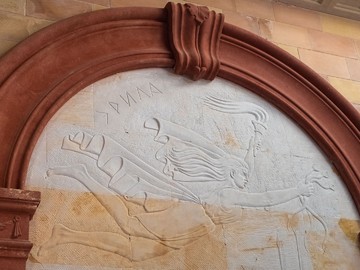 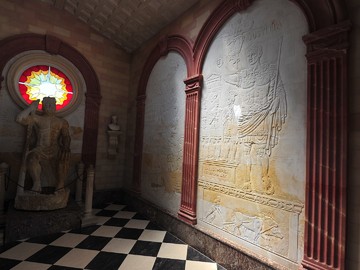 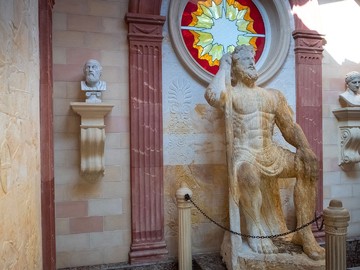 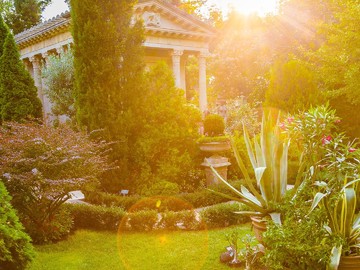 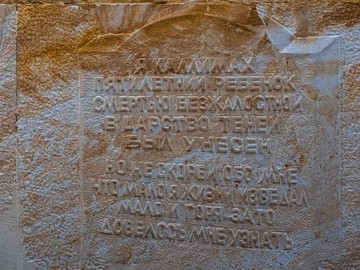 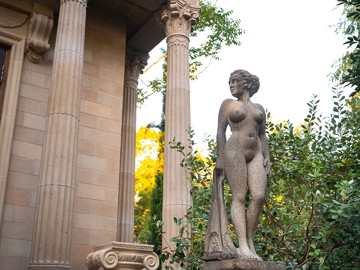 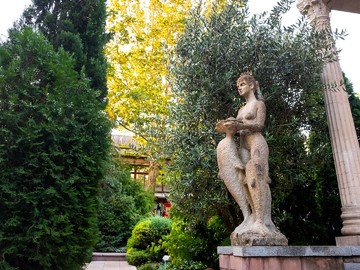 The pavilion of antiquity is a stylized temple of Zeus built according to the ancient canons and resembling the image of the classical Greece. Sculptures of Aphrodite and Galatea adorn the parapets of the granite steps.

A wing-handed goddess of victory Nika holds her arms out over a tall oak door. She and the eagle are the attributes of Zeus, the Almighty and the Thunderer.

Homer is represented in the pavilion as the first author to anthem and condemn a war, and the Trojan War itself, as the mother of human wars, is revealed here in its cause and effect.

It is no coincidence that the central top place on the first wall is given to the image of Eris, the goddess of discord, who flies to the camp of the Greeks to kindle enmity, with snakes and a torch in her hands. Enmity arises in the soul of one person and spreads to everyone like a disease, turning into an epidemic named a war. Until now, the only cure for this disease was the Death. Therefore, the god Thanatos looks so sadly and indifferently from above with his empty eye sockets to the deeds of а man. Therefore, the phrase of Zeus from the “Iliad” sounds so mournful: “...Of all creatures that breathe and creep in the dust, it is true that in the whole universe there is no more miserable creature than a man...”

Standing in this temple, in front of Homer, you can endlessly talk and think of true and false causes of the war, the beautiful myths surrounding these causes. But noticing the phrase carved over the head of Zeus, you just have to go silent. For it says: “Everything comes from you”. This phrase is also from Homer. It completed the appeal of the heroes to the supreme god: “You, the omnipotent Almighty God, everything comes from you!..” And then a request followed. But here this phrase sounds opposite, it sounds like an answer to every request, to a complaint and a problem - one comprehensive answer: “Everything comes from you!”.

The war, which became the basis of the Roman Empire, turned into science, into art. The war was anthemed, warriors were deified. The art of killing was raised to the level of aesthetics, murders became entertainment. And suddenly a short Lukian’s epitaph on the death of a five-year-old boy: “I, Kalimakh, a five-year-old child, was swept away by the ruthless death to the realm of shadows... But do not grieve for me that I have lived so little because I knew little sorrow.”

The war gave birth to the Great Empire of Rome, and the war destroyed it... But you shouldn’t throw out the child with water. Giving birth to a military science, the Romans first stated the principles of government and law. The Roman justice still forms the basis of civil law. The military science also caused urban planning which later became Classicism at all continents.

Roman proverbial phrases: “Where the law is vague, there is no law”. “The blessing of the people is the higher law”. “The voice of the people is the voice of God”. Aren’t they relevant to modern democracy? Is it possible to say that two thousand years old dream has already come true? And whether Homer is really relevant with his rethought phrase: “Everything comes from you”?!