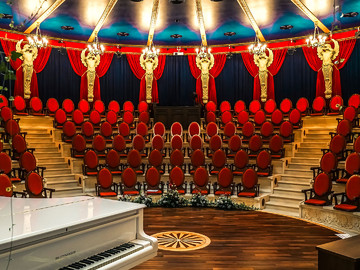 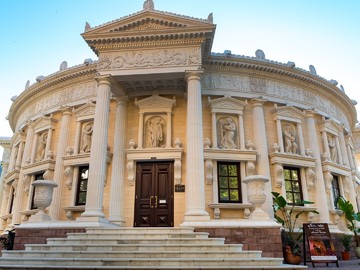 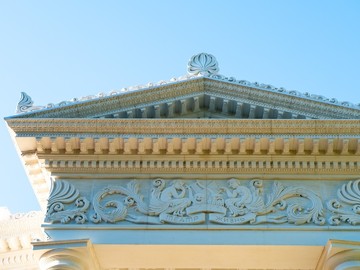 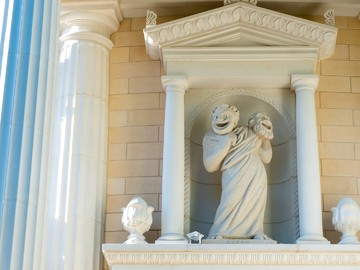 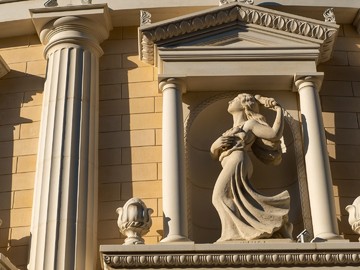 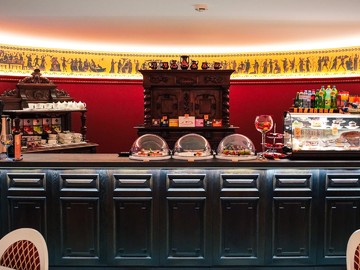 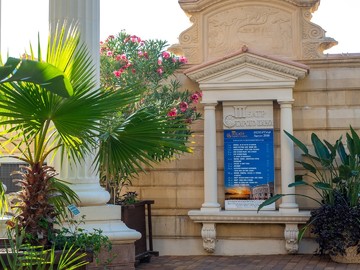 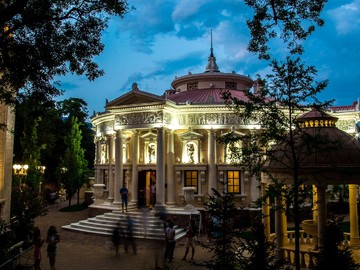 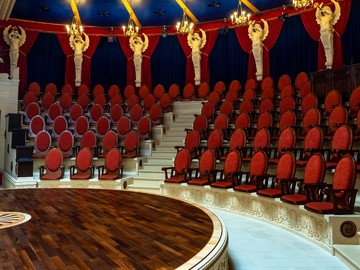 The theater occupies the most prominent place in the park, and it’s not just a beautiful building in the form of a huge rotunda, but a whole ensemble. This includes a theatrical arbor, a decorative poster, and a beautiful gardening which borders the luxurious architecture.

When starting his design, the architect set himself the most difficult task: the building of the theater itself must answer the questions: What is a theater? How did it emerge? What is its role in the history of culture? Hence it has such a form, such an inner space, and such an abundance of reliefs and sculptures.

In fact, this is not just a building, but a multi-syllable architectural and sculptural composition. Here is strict Greek classics, and splendor and solemnity, and festivity, and dashing courage, and fun – everything that bears a peaceful life after the hard work and battles with which the entire history of mankind was saturated.

The theater is a holiday. And a holiday is a joy of life. This is the main idea of the author. And what holiday does go without theatrical performances? It is this question that leads us to the origins of the theater, to the ancient sources and to the ancient Greek theater.

Another thing is a theater arbor striking with the phrase: “Art is our mirror”. Arbors were always built in parks. These are places for seclusion and dating, for reflection and conversation. Then, they are arbors. In our one, we can think over, talk and admire. The north side of the theater is opening right before your eyes telling us about the ancient holidays, which in fact are not much different from today.

However, the arbor has another function – the scenic one. Being a rather rare architectural form – half-rounder, it can very easily, without any additional manipulation, turn into a street scene, with the same sizes as a theater scene itself. Thus, the theater expands and goes beyond the main building, as they say, directly to the people. It is not necessary to be a professional artist on this stage, as anyone who has a desire and possesses appropriate ability can perform here.