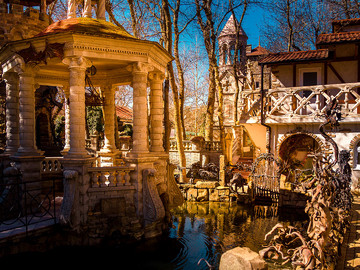 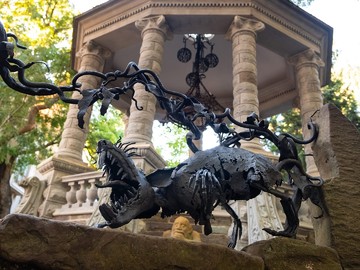 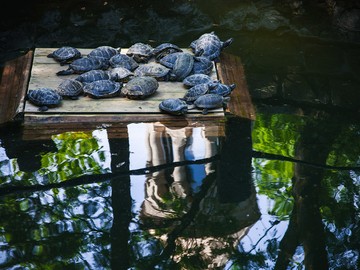 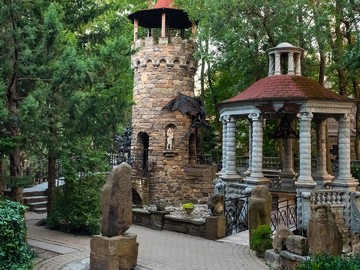 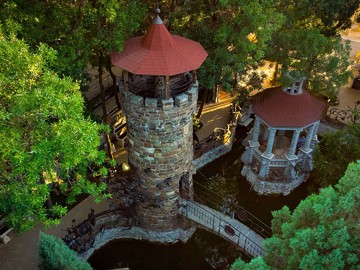 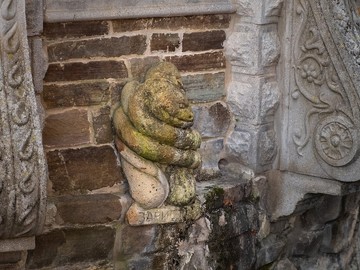 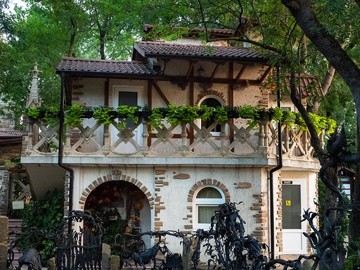 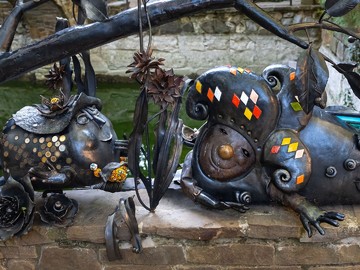 Situated below, in the wood part of the park, the pond is the most successful place for the European medieval architecture.

High mossy trees, a pond framed by natural stone, with a stone watch tower and a stone bridge rising above it – this is a bright example of fortification construction. This is a song to stone that played a great role in the history of mankind. The watch tower, a stone spiral staircase is also a monument to those virtuoso masters who determined the appearance of their time.

The medieval city was well defended. In such conditions, the well-being of citizens was growing, and in our park it is symbolized by a magnificent palace arbor in the middle of the pond. But why it was in the periods of prosperity when the people “cast prudence to the winds”?

What prevents a person from prospering? The answer to this eternal question is clearly read in the images of waterborne sculptures surrounding the arbor. Scenes of the Last Judgment are represented in sculptural fountains depicting the seven deadly sins inherent to humans.

In the gloomy Middle Ages, people spoke of the deadly sin as often as of virtue.

But people spoke so much of the sin not because it surrounded them as a devil, but because Anger, Pride, Greed, Fornication, Gluttony, Envy and Despondency are the weaknesses of every person, acquiring the sin status when they become obvious.

Upon entering the palace arbor, close your eyes and walk around the table seven times. Then, with your hands on the polished granite, open your eyes and turn back to the span between the columns. Remember it and, coming out from the arbor, carefully look at the image of the sin you should think of. And do not tell anyone about this. There are no beautiful sins.

However, there are only seven sins, and there are eight sculptures in the arbor. Like in life. Everyone should surely have a chance...

The “House for Two” located on the shore of the pond just behind the palace arbor is, of course, not a copy of the medieval dwelling. This is a romantic architecture made of modern materials and with modern amenities for modern pleasures. Ideal conditions are created in the “House for Two” for someone who one day would like to open his/her soul to somebody. And once it will surely happen!

And people will hardly forget the story of lovers Eloise and Abelard, written by the philosopher, who 900 years ago raised the human’s question to the level of theological sciences.