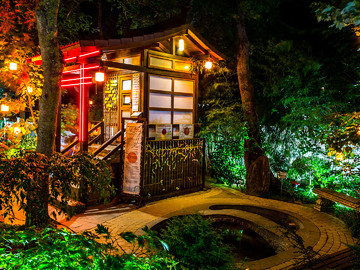 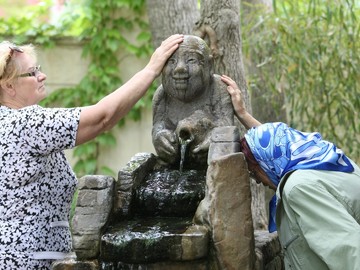 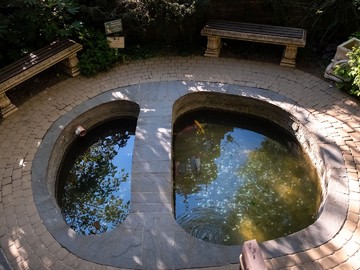 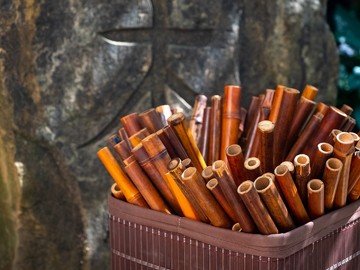 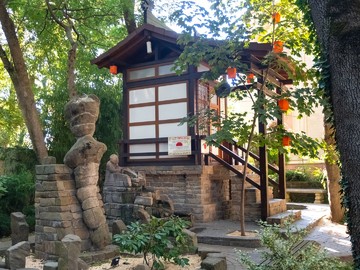 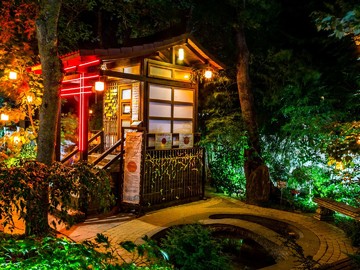 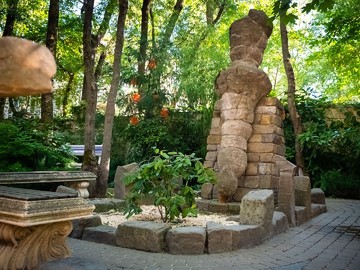 The central place here is occupied by the Shinto chapel. Shinto is the traditional religion of Japan based on the deification of the natural forces and phenomena and worshiping them. It is believed that everything on earth is more or less animated.

Each thing has its own spirit, the deity – Kami. Most sanctuaries are dedicated to a certain Kami and are situated in picturesque places. The chapel in our park is dedicated to one of the “seven gods of happiness” – Ebisu. He is the only one of seven having Japanese origin. It is the god of happiness and luck, the god of hard work, the patron of trade and crafts, a symbol of material well-being, and also the keeper of the young children’s health. Ebisu is a bit deaf, but cheerful and benevolent, so he is often called a laughing god. In his hands he has the sacred fish Tai, which symbolizes the reward for inner purity because “it is difficult to catch the sacred carp with your bare hands in clear water”.

The sculptural image of the god Ebisu is next to the chapel. The source of pure water flows from Tai fish to observe the ritual of washing hands and mouth. There is a “shintai” inside the chapel – the body of Kami – an object in which, as it is believed, the Kami spirit infuses. It is always hidden and not shown.

The main principle of Shinto is life in harmony with nature and people. The deification of nature underlies the centuries-old fascination of the Japanese with stones, special reverence for the mountains, rocks and bizarre fragments. There is a legend about the famous painter, who refused to bow to officials, but he bent deep bows to handsome stones. Even today’s masters speak of a stone as of a living person. The famous stones have their own biography; it is believed that they are charged with a special vital energy. Therefore, it is not accidental that the central place in the Japanese Corner is occupied by a huge stone called the “Black Samurai”. This is a natural geological formation that came out of the rock. When the stone is wet, it is completely black, hence its name.